Prime Minister announces measures to complete the work stuck on 200 meters in Yopougon . 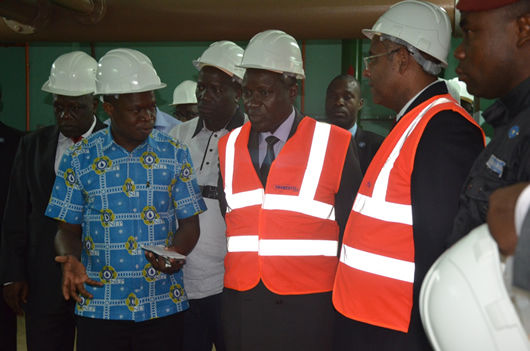 Prime Minister announces measures to complete the work stuck on 200 meters in Yopougon .

On Saturday, March 22nd, in the afternoon, the Prime Minister, Minister of Finance, Finances and the Budget, the mister Kablan Duncan under the leadership of the Secretary of the Economic Infrastructures mister Patrick Achi, without forgetting the presence of Madam Secretary Kaba Nialé in charge of the Economy and Finances and Mr. Secretary of environment, the Urban Healthiness and the Sustainable development, the mister Alla Kouadio Rémi, visited the works of strengthening of the drinkable water distribution system of the municipality of Yopougon. This visit began at the level of the treatment station of located Niangon in the industrial park.

The global objective of this project is to strengthen the system of the drinkable water supply of the city of Abidjan by the increase of the production of drinking water and the strengthening of the distribution network.

The financing are respectively of the Islamic development bank ( BID), the Fund(Collection) of the OPEC for the International Development ( OFID) and the Republic of Ivory Coast ( RCI). The total amount of the works and the services(performances) is 13.263.353.400 fcfa.

Seven companies made the works among which two engineering consultants’ offices(desks) and an audit firm.

This blocking is due to the shrinkage of the way occupied by houses which prevent any progress of the excavator asked to dig(accentuate) the trench of funeral of pipes.

The Prime Minister who evoked the fast population growth revealed that in the medium term, a project of food(supply) of the economic capital from the river Bandama situated in hundred kilometers will be concretized.

« We are for this important file of water conveyance of Abidjan there. The President of the Republic insisted so that the problem of deficit in drinking water is settled in 2014. Thus it is necessary to increase capacities » declared the Prime Minister.

« Here in the station of Niangon we shall have 40.000m 3 besides 47.000m 3 available at present so as to being able to feed the districts of Gesco, Niangon, Bonikro, Grandma Adjoua. Globally at the end of the year, we should be able to cover the deficit » added the Prime Minister.