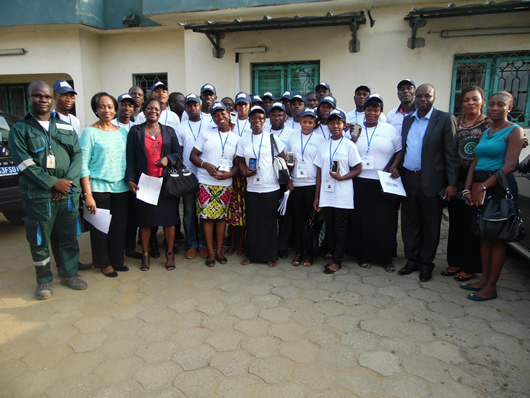 On Thursday, February 05th, 2015 in the regional office of the SODECI to Yopougon sector Ananeraie took place the launch of the  » Brigade Drinking water « , in presence in particular of Regional Mrs Kablan Adjoint of the Director(Manager), the mister Bouafou Directeur of the Control of the exploitation(operation) and the Quality in Onep, and Commercial and Administrative Mrs Djédjé Chef of the Contrôle Service(Department) in Onep.
Indeed, the entitled project  » Drinking water brigade  » was introduced by the Ministry of Economic Infrastructures and led(driven) by the ONEP. This, with the aim of knowing the level of service(department) of distribution(casting) or the felt of the households(houseworks), seen the important volume of drinking water which bring the new stations(resorts), to lead corrective and preventive actions.

This brigade has silloné the following municipalities:

To bring to a successful conclusion her(its) mission, she(it) used Smartphones provided with questionnaires which the population had to answer, in particular concerning the continuity and the level of service(department).

The data collection was made from February 05th till April 30th, 2015. The big teachings which we can pull(fire) are the following ones:

Concerning the Continuity of service
70 % of the households questioned in 10 selected municipalities have access to the water
24 hours a day.We note a rather positive impact of the projects of Niangon II and Bonoua. In particular,

– To Yopougon where about 80 % of the population has access to the water 24 hours on 24 further to the putting into service of the project of Niangon II in December, 2014,

– In Abidjan Sud (Treichville, Marcory, Koumassi and Port Bouet) with 81,2 % of the population which has some water in a continuous way after the inauguration of the Project Bonoua I.

In a global way, 20 % of the population receives from some water at intervals. This proportion is widely influenced by the municipalities of Abobo and Anyama where respectively 23 % and 39 % of the households(houseworks) have access to the water in a episodic way. The still undelivered projects (SONGON and the works on the network) will allow to improve the continuity of service(department) in these two municipalities.

Concerning the Quality of service(department)

54 % of the households(houseworks) declare credit note of the water with a good pressure against 46 % which have some water with a low(weak) pressure, a situation which is understandable by the fact that the works of strengthening and restructuring of the distribution network did not really begin.